O‘Neil Creek Winery will be offering grilled rib-eye steak or chicken breast with baked potato, salad and desert ala-cart.  Rick Zwiefelhofer from Harm Way Bar and Grill will be the grill master for the night.

Music will be played by Roxie and Larry (The Gater Band) O’Neil Creek winery will be offering grilled rib-eye steak or chicken with baked potato, salad and desert ala-cart.  Rick Zwiefelhofer from Harms Way Bar and grill will be the grill master for the night 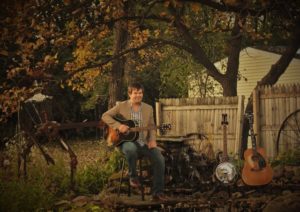 Jeff began honing his songwriting skills working the red-eye shift as a taxi driver. Railroad conductors, heartbroken men and women after bar close and wild out-of-towners were all frequent riders who freely opened up about their personal lives. Their late night conversations were all inspirations to the genesis of his upcoming career as a songwriter and entertainer.

Jeff has toured the lower 48 from coast to coast as well as England, Scotland and Wales. He’s opened for Bernie Sanders, Dr. John, Mason Jennings, members of Wilco, Joe Pug, Hymn for Her, Bill Staines, and has performed alongside Phil Vassar. He has shared the stage with Justin Vernon, and has opened one of his tours at the legendary Big Top Chautauqua. He has 6 albums under his belt. One of which is with Charlie Parr & folk music legend Greg Brown.  His latest CD, ‘Renegade Revelations’ recently received a 4 star rating in The Netherlands on the alt-country review website, altcountry.nl.